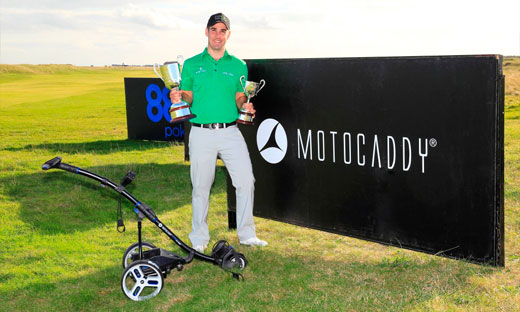 Oliver Farr won the PGA EuroPro Tour Championship, and with it the 2013 season Order of Merit, after finishing 13 under par for his 54 holes at Prince’s Golf Club.

Daniel Gavins was one behind in second place, which also confirmed his position as runner-up on the tour rankings. Paul Reed and James Watts finished the tournament tied for third on ten under par.

The top five on the Order of Merit are awarded Challenge Tour cards for 2014. George Woolgar, who was guaranteed a top-five finish before Tour Championship, came third with Dave Coupland and Paul McKechnie also progressing to Europe’s second-tier Tour.

Farr (Worcester Golf & Country Club) shot a final-round 67, five under, to beat overnight leader Gavins (De Vere Oulton Hall) by one and in doing so also claimed the Order of Merit title.

“The last two days I have really controlled the ball well and put some great scores in,” said Farr. “It was nice to do that under a lot of pressure. I wasn’t quite sure of my Challenge Tour card for next year but it is brilliant to get it.

“The Challenge Tour card only really occurred to me on the 18th. I was focussing on the last round. I came here this week to just play this tournament as it is and I did that. It only really came into my mind on the 18th tee, then I thought I could win the Order of Merit.

“Playing on the Challenge Tour is something to really, really look forward to. I have played some Challenge Tour events this year and I feel comfortable on there. There is a little step up but I will prepare myself and get some good practice in over the winter to get ready for next year.”

The Welshman led for much of the back nine after shooting five birdies on the first 11 holes. A birdie for Gavins on the last left Farr with a short but nervy putt for victory, which he calmly made to collect a winner’s cheque of £15,000 and a brand new Motocaddy S3 PRO.

Richard Wallis finished sixth on the PGA EuroPro Tour Order of Merit, missing out on the top five by just £69.17. However, if any of the top five earn a Challenge or European Tour card via the European Tour Qualifying School, he will receive their satellite tour graduate category.

Marcus Armitage collected the Rookie Of The Year trophy after finishing ninth on the Order of Merit.

The Tour Championships concludes the 2013 PGA EuroPro Tour season. Details of the 2014 Qualifying School will be available at www.europrotour.com in December.